The Virtual Cheese and Wine Tours are immersive online tasting experiences hosted by Francis Gimblett, MD of Taste of the Vine and Gimblett Cheese, and author of Gimblett's Guide to the Best of British Cheese. The event will include a guest appearance by legend of English winemaking, Peter Hall of breaky Bottom. A quick pre-trip Virtual Tour of the Palate will have you primed and ready to explore the grapes, regions and vintages of English wines in series of fun and interactive challenges. And that's only half the experience. The cheese tastings and challenges are equally interactive. Because we use the very finest examples of British artisan cheese, each with its own flavour language, they tell us of the soils, climates, histories and passions of the people who bring them to you. 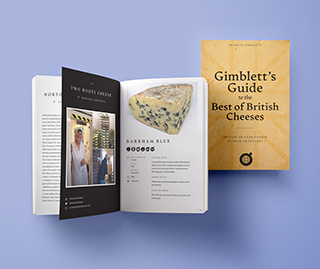 Join Francis Gimblett for a recreation of the 100 Cheesemakers in 100 Days road trip he undertook to compile Gimblett's Guide to the Best of British Artisan Cheese. As a part of the British Cheese Weekender, you can join for free via their website (see below) or buy a pack here and you will also receive a signed copy of the guide and tasting samples of four premium British artisan cheeses to accompany the trip. You can of course just source the cheeses yourself and taste along for free. In a winter break from cheesemaking duties, Francis set himself a target of 100 days to visit his 100 top British cheesemakers in order to interview them and taste and photograph their cheeses for the guide. The cost of the undertaking meant he had to camp on the roof tent of his Land Rover, exposing him to sub-zero temperatures, floods and a hurricane, at one point requiring an army rescue in the Brecon Beacons!

This month we join David Jowett, one of the country's most dynamic cheesemakers. David has transformed his cheese range during the pandemic to include cheeses that will likely become some of the country's most iconic offerings. We will be tasting two of these: Moreton, King Stone Dairy's example of a rustic mountain Tomme cheese, and Chedworth, made to an ancient local recipe. Both are made on-farm at King Stone Dairy from the organic milk of a single herd. For more on David and King Stone Dairy, as well as tasting notes from the guide, click on Cheesemaker of the Month above. Come back and buy a cheese pack, at a (not-for-profit) £9.50, it'll be one of the best value hours with friends you can have.