The Gimblett Cheese micro-dairy sits on a wooded, northwest-facing slope, near Haslemere on the Sussex/Surrey border. The cool and humid climate is ideal for the slow development of the small-batch cheeses the dairy produces.

After two years of trials that included recipe development and trips to the major European cheese regions, Pam and Francis released Floyd, a soft, highly scented, washed rind cheese, influenced by an old recipe given to them by the monks at the Abbaye de Cîteaux, home to the Cistercians, the order credited with the creation of Époisses.

The pair are now working on the re-introduction of a ‘lost territorial’, a cheese that was native to the Weald and Downs of Sussex but became extinct at the turn of the 19th century. 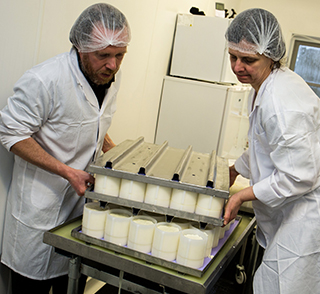